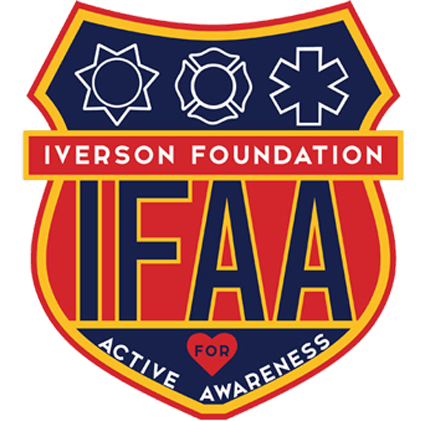 He was survived by his wife, Ashley, their daughter Evie, and – at the time – their unborn daughter Taylor. Ashley had spent more than half her life battling severe anxiety and depression largely in part from PTSD due to nearly losing her home at the age of 13 from arson and also from an inner need to help others on a large scale.

Just one month prior to Cory’s passing, a colleague took his own life leaving behind a young child and wife. It was then that Cory understood the gravity of mental health and the devastation it can leave behind in its wake. In founding the Iverson Foundation for Active Awareness (IFAA), Ashley is able to keep Cory’s memory alive for their daughters and to continue on Cory’s legacy through his sacrifice to help all first responders; those that selflessly help others on a daily basis.

IFAA has made it its mission to change the culture within the first responder community. A culture that implies “if you’re not strong enough mentally to take it, you don’t belong”. Currently, the culture has little room for the consistent decompression or the open communication necessary to maintain sound mental health after seeing and experiencing things the human brain can only compartmentalize, cover up, or “add to the bucket” for so long.

Hear Ashley Iverson explain her vision for the foundation.

We believe through a strong support system and trust within the workplace, accompanied by proper techniques on how to dig deep, we can bring the darkness into the light. Our intention is to ultimately improve mental health through communication, trust, and love within a peer led environment.

We are confident the culture change and the support from IFAA will not only improve productivity, it will decrease job and non-job related depression and anxiety, improve interpersonal relationships within professional and personal lives, and most importantly reduce suicide rates among first responders.

We are working to raise awareness within the home for family members of these first responder heroes. It is important for the heroes left at home to recognize the signs and the symptoms of anxiety, depression, and PTSI (Post Traumatic Stress Injury) and to understand the tools and options available to help those affected.

Our prayer is not just to be well intentioned but that WE will finish well.

Learn more about the mission to raise awareness of the mental and emotional state within the first responder community.

Learn more about how you can help reduce mental and  behavioral health concerns in first responders through a variety of modalities.